First, the tribute of Christian Noyer, Governor of the Banque de France, to his colleague of the General Council of the Banque de France: “Bernard Maris was a man of heart, of culture and of great tolerance; we will truly miss him” (Banque de France press release of 7 January); “A kind and peaceful man, a man of culture and dialogue. Naturally, he assisted us with our Cité de l’économie et de la monnaie project; this economics professor was in his element and always involved. (…) Our differences regarding economics, which were real over the past months, never affected our relationship, which was forged by mutual esteem and common values. Extremely kind, with a caustic and mischievous mind, always smiling even in the face of adversity, this brave man sticked to his ideals until his tragic demise (…) » (Le Point, 10 January).

Adieu to Bernard Maris from the Alternatives économiques team (Philippe Frémeaux, Christian Chavagneux, Gilles Raveaud, and Jean-Paul Harribey ; with links to articles published by B. Maris in this magazine)

Tribute by the Échos to Bernard Maris, by Dominique Seux and Jean-Marc Vittori who debated with him each Friday in the programme “Le débat économique” on France Inter

Furthermore, our partner, the National Audiovisual Institute (INA), gives access to a large number of videos (from 1990 to 2014) excepts from programmes with B. Maris

Bernard Maris playlist on the website of the INA:

Lastly, the photo of New York Federal Reserve economists gathering in tribute to B. Maris: 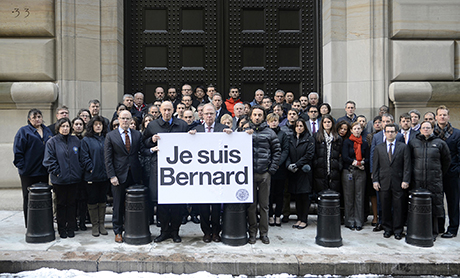